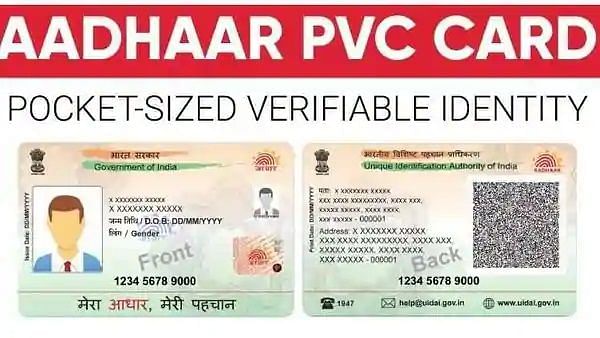 The Single Identification Authority of India (UIDAI) announced the brand new Aadhaar PVC card, which fits easily in your wallet just like your ATM or debit card. UIDAI has authorized Aadhaar to be reprinted on a polyvinyl chloride (PVC) card that individuals can now order online. The Aadhaar PVC card will be delivered by Speed â€‹â€‹Post within five working days (excluding date of request).

What are the security features of Aadhaar PVC card

Who can get the Aadhaar PVC card?

Any natural person with an Aadhaar number can apply for the PVC card. â€œOrder Aadhaar Cardâ€ is a new service launched by UIDAI which allows the holder of Aadhaar to get their Aadhaar details printed on a PVC card by paying a nominal fee. Residents who do not have a registered mobile number can also order using an unregistered / alternate mobile number.

How to track the status of Aadhaar PVC card?

The status of the Aadhaar PVC card can be tracked at www.uidai.gov.in under the â€œMy Aadhaarâ€ tab.

Click on “Check Aadhaar PVC Card Status” under the “My Aadhaar” tab. On the new screen, you will need to enter a 28-digit SRN, a 12-digit Aadhaar number, and a captcha code. The status will be reflected after clicking â€œCheck statusâ€.

How long will it take you to receive the Aadhaar PVC card?

In accordance with the FAQs on the UIDAI website, once the request has been made, the UIDAI will deliver the card to the post office within five working days (excluding the date of the request) and the PVC card will be delivered via the Speed â€‹â€‹Post services.

What are the costs for ordering the Aadhaar PVC card?

When ordering Aadhaar PVC card, an individual will need to pay 50 (including GST and speed postage).

UIDAI launches the Aadhaar PVC card; Check here for fees, features and how to apply