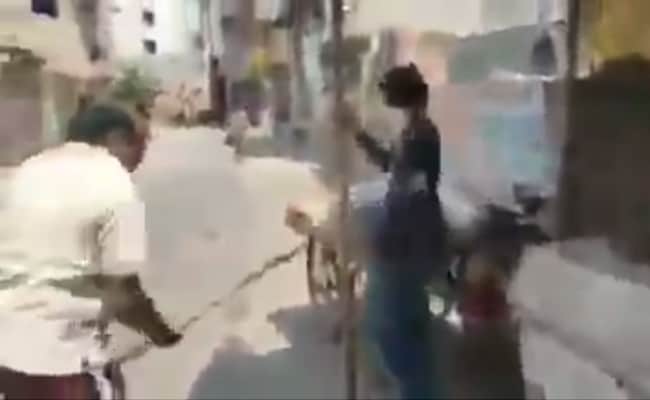 Police said they were investigating the case.

A man was arrested for mistreating and beating a vegetable vendor in southeast Delhi for failing to show his ID card, police said.

A one-minute video of the incident near Badarpur was shared widely on social media.

It shows the accused, Praveen Babbar, demanding his identity card from a vegetable vendor. When the seller identifies himself as Mohammad Saleem, the man mistreats him and also beats him and threatens him not to enter the locality without an identity card.

Police said they were investigating the case.

Senior police officer RP Meena said the cyber cell saw a motorcycle with a Delhi registration number in the video and tracked down the vehicle’s owner Sudhanshu, a resident of Molarband.

â€œSudhanshu told police that the incident took place on Tajpur Road and identified the man who hit the vegetable seller as Praveen Babbar,â€ the officer said.

The defendant, Babbar, who works with a travel and travel agency, told police he asked nearly 10 vegetable vendors roaming the area to leave and obey the lockdown rules. Since Saleem did not leave, he got angry and assaulted the vegetable seller.

The vegetable seller, however, told police that on April 10, Babbar questioned him about his religion, beat him and said they were spreading the coronavirus.

“We have arrested Praveen Babbar. Such incidents will not be tolerated at any cost and the law will run its course against these people,” the DCP said.

A case has been registered against Babbar under sections / charges of gratuitous provocation with intent to riot, assault with intent to dishonor a person, uttering words with willful intent to hurt feelings religious of any person and willfully suffered injuries at the Badarpur Police Station.

Want to apply for a credit card? Check if you are eligible